The family owned and operated Scarponi-Bright Funeral Home, Inc. was originally owned by John Brokaw and it was operated as The Brokaw Funeral Home. It was later purchased by Ernest A. Bright, Jr. after his return from World War II in 1947. Mr. Bright later changed the name to Bright's Colonial Funeral Home and constructed a facility at the present location in 1959.

The Funeral Director, Vincent Scarponi, served his internship at this funeral home from 1974 to 1977. He later purchased the funeral home in September of 1978, following the death of Mr. Bright. It was not until 1993 that Mr. Scarponi added his name, making it Scarponi-Bright Funeral Home, Inc.

Naughright–Scarponi Funeral Home is a long established funeral home in a quaint town with a vintage feel featuring high ceilings, stained glass windows and large mouldings. This funeral home has been serving the area since the 1870's. The funeral home has seen three generations from the Naughright family with Charles A. Naughright passing away in 1970. The building was purchased in 1937 and began operation as a funeral home in 1938. Previous to this time, Mr. Naughright operated a store front funeral parlor after his return from World War I. Before the store front operation, funerals were held out of the person's house. 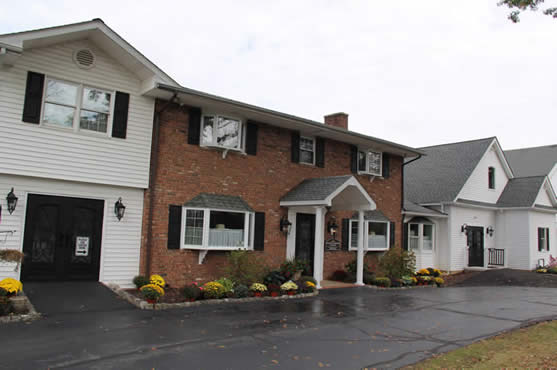